What kind of ball doesnt bounce? Ответ: (A snowball!)

What do snowmen eat for breakfast? Ответ: (Snowflakes)

How do snowmen travel around? Ответ: (By iceicle!)

What kind of bird can write? Ответ: (A PENguine)

How do you call an eskimo cow? Ответ: (Eskimoo!) 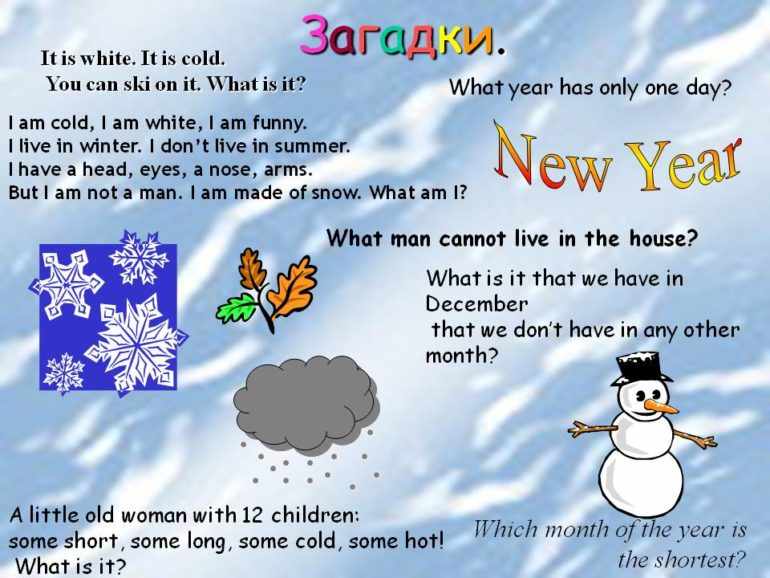 What is Snowmen in May? Ответ: (A puddle!)

What kind of candle burns longer, a red candle or a green candle? Ответ: (Neither! Candles always burn shorter!)

Whats the best thing to give your parents for Cristmas? Ответ: (A list of everything you want!)

What do elves learn in school? Ответ: [The Elf-abet!]

What was so good about the neurotic doll the girl was given for Christmas? Ответ: [It was already wound up.]

Did you hear that one of Santas reindeer now works for Proctor and Gambel? Ответ: [Its true, Comet cleans sinks!]

How many reindeer does Santa Have??? Ответ: (named below)

Mom, can I have a dog for Christmas? Ответ: [No, you can have turkey like everyone else.]

What do you call a cat on the beach at Christmastime? Ответ: [Sandy Claws!]

What kind of bird can write? Ответ: [A PENguin.]

Why did Santa spell Christmas N-O-E? Ответ: [Because the angel had said,No L!]

Who is never hungry at Christmas? Ответ: [The turkey, he is always stuffed.]

What do you call people who are afraid of Santa Claus? Ответ: [Claustrophobic.]

Judge: What are you charged with? Prisoner: Doing my Christmas shopping early. Judge: Thats not an offense. How early were you doing this shopping? Prisoner: Before the store opened. What do you get if you cross Father Christmas with a detective ? Ответ: [Santa Clues!]

A woman went to the Post Office to buy stamps for her Christmas cards. Clerk: What denomination? Woman: Oh, good heavens! Have we come to this? Well, give me 50 Baptist and 50 Catholic. What do monkeys sing at Christmas? Ответ: [Jungle bells, jungle bells]

What do you do if Santa gets stuck in your chimney? Ответ: [Pour Santa flush on him.]

What do snowmen eat for breakfast? Ответ: [Snowflakes.]

Q: What does Father Christmas write on his cards at Christmas? A: ABCDEFGHIJKMNOPQRSTUVWXYZ (no-L) Whats the best thing to put into a Christmas cake? Ответ: [Your teeth.]

Why does Santas sled get such good mileage? [Because it has long-distance runners on each side.] What are Christmas trees like bad knitters? Ответ: [They both drop their needles.]

Why does Scrooge love Rudolph the Red-Nosed Reindeer? [because every buck is dear to him.] How do sheep in Mexico say Merry Christmas? Ответ: [Fleece Navidad!]

What do you get if you deep fry Santa Claus? Ответ: [Crisp Cringle.]

Knock Knock Whos there ? Avery Avery who ? Avery merry Christmas ! Why is Christmas just like a day at the office ? Ответ: [You do all the work and the fat guy with the suit gets all the credit.]

What do you get if you cross an apple with a Christmas Tree? Ответ: [A pineapple.]

What did the guest sing at the Eskimo Christmas Party? Ответ: [Freeze a jolly good fellow]

What did Adam say on the day before Christmas? Ответ: [Its Christmas, Eve!]

What did the ghosts say to Santa Claus? Ответ: [Well have a boo Christmas without you.]

What did Santa shout to his toys on Christmas Eve? Ответ: [Okay everyone, sack time!!]

If athletes get athletes foot, what do astronauts get? Ответ: [Missletoe!]

If Santa Claus and Mrs. Claus had a child, what would he be called? Ответ: [A subordinate claus.]

Just before Christmas, there was an honest politician, a kind lawyer and Santa Claus travelling in a lift of a very posh hotel. Just before the doors opened they all noticed a $5 bill lying on the floor. Which one picked it up?? Ответ: [Santa of course, the other two dont exist!]

What do you have in December that you dont have in any other month? Ответ: [The letter D!]

Why was Santas little helper depressed? Ответ: [Because he had low elf esteem.]

What do you get when you cross a snowman with a vampire? Ответ: [Frostbite.]

Knock Knock Whos there ? Holly Holly who ? Holly-days are here again ! What do you get when you cross an archer with a gift-wrapper? Ответ: [Ribbon hood.]